The area of the “Bory Tucholskie” National Park is located on south edge of historical Pomerania. In a natural and forest land of Bory Tucholskie. From the ethnographic perspective, it is located peripheral to the Kaszuby region, and according to that breakdown, the area covered by it is the Zaborska Land (“Terra Zaborensis”). On the other hand, from the physical and geographical perspectives it is located mainly on the Charzykowy Plain with its south-west part in the Bory Tucholskie forest, and its southern part in the Krajna Lakeland.

Border location of the current area of the “Bory Tucholskie” National Park from the perspective of former historical administration divisions caused often changes of tribal, proprietary or administrative affiliations. The above mentioned resulted in the exposure to multicultural external impacts. Zabory is a historical name referring to the area located “behind forests” looking from former secular and religious authority and administration centers. Historical Zaborska Land covered the area of former parishes of Brusy, Wiele and Czersk covering the area within their initial boundaries. As the time passed also and old parish of Swornegacie felt under that name, and at contemporary times, from the ethnographic perspective only, it covers also the vicinity of Dziemiany and Lipusz. Zabory constituted a separate entirety with regard to neighboring lands and they were referred to as “terra zaborensis” at princely times and as “land Sabor” at Teutonic times. In the pre-Teutonic period, the area of the contemporary national park fell in to the composition of the secular princedom and most probably it belonged to the Szczytno castellany. After Pomerania got under the occupation of Teutonic Knights, the Człuchów komturia was established. And in 1330 the Tuchola komturia was established to which Zabory became annexed to. The boundaries of the Człuchów komturia ranged slightly to the east beyond Chojnice, whereas the Zaborska Land belonging to the Tuchola kompturia was administered by a special Teutonic official. Initially he had his seat in Brusy and subsequently in Kosobudy. After the Thirteen Years’ War (1466) the land of the Tuchola and Człuchów komturias got incorporated into a newly established the Tuchola Starosty and the Człuchów Starosty. Those administrative divisions were binding until 1772, namely the first partition of Poland. Chojnice fulfilled at that time the function of the poviat city and the Chojnice Poviat was created from lands of the Tuchola Poviat and the Człuchów Poviat. During the Second Polish Republic, the Chojnice Poviat included apart from the city of Chojnice, 88 village municipalities and 40 so called townships. The interwar period was the time of constant changes in the numbers of municipalities and rural areas. In 1933, nine collective municipalities (Brusy, Brzeźno Szlacheckie, Czersk, Chojnice, Konarzyny, Leśno, Lipnica and Rytel) were created on the area of the Chojnice Poviat. 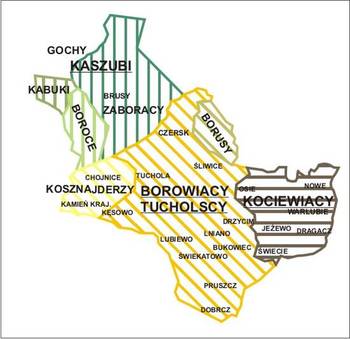 Natural land of the Bory Tucholskie forest is not uniform from cultural perspective. This area for the first time was subjected to scientific ethnographic research in the forties of XX century. The research was conducted by priest Bernard Sychta. Priest Sychta proves in his dissertation entitled “Material Culture of Bory Tucholskie” that Borowiacy, displaying numerous specific regional elements stemming from long-lasting existence within a limited forest area, have many features in common with Kociewiacy and Kashubs. Bory Tucholskie area is particularly strongly bound with Kashubs. The relationship with Kashubs is visible in wood constructions. It is particularly evident with regard to arcades, roof construction and over-crowning ornaments. One may see wooden huts, among others, in Chociński Młyn, and Swornegacie. Another common element refers to dug-out boats used by Borowiacy fishermen and Kashub fishermen. Those strong relationships result in ethnic diversity of Bory Tucholskie. North-west edge of Bory Tucholskie is inhabited by Kashubs, including Zaboracy, Gochy, Kabuki and Boröce. The middle part of Bory Tucholskie is inhabited by Borowiacy Tucholscy, whereas the north-east part is inhabited by Kociewiacy. Inhabitants of the Zaborska Land are called Zaboracy, Krëbani or Krubani. The area to the north-west of Charzykowy, to the boundaries of Gochy and Kabuki settlements, is inhabited by Kashub Borowiacy called also Boröce. The vicinity of Konarzyny is inhabited by Kabuki, whereas, Gochy live a little bit more to the north, in the vicinity of the villages of Brzeźno Szlacheckie, Borzyszkowy, Kiedrowice, Borowy Młyn, Lipnica, Zielona Chocina ranging up to the natural borderline with Zaboracy formed by the Zbrzyca River and the series of Lakes: the Laska Lake, the Księże Lake, the Długie Lake and the Parszczenickie Lake. The Zaborska land is characterized by slighter German influences, contrary to the vicinity of Chojnice, where more fertile soil attracted western colonists already since XV century. The influence of the Kashub region is reflected in forms of folk and regional cultures.

Historic development is sparsely preserved on the area of the “Bory Tucholskie” National Park and its surrounding and it has its counterparts in adjacent ethnographic regions, whereas colloquial language reveals numerous elements of the Kashub language. Local population has created certain, specific only to itself, regional features of culture. The above mentioned refers first of all to the use of wood as the construction material. A small scale of the development and scarce ornaments constitute a typical feature of that area.