Bory Tucholskie refers to one of the biggest forest complexes in Poland covering the area of about 350 thousand ha, the forest complex is an important sanctuary for numerous species of plants and animals as well as an important element for national as well as European network of ecological corridors. Apart from numerous nature reserves, landscape parks as well as the “Bory Tucholskie” National Park, natural assets of this valuable area are protected also with the scope of Natura 2000 program. Almost the whole complex of the Bory Tucholskie forests is covered by two bird sanctuaries, there are numerous habitats’ areas. Below, we present the more detailed description of the two sanctuaries corresponding in part to the area of the “Bory Tucholskie” National Park. 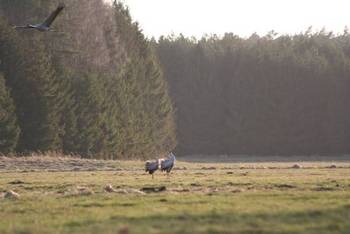 The area of the Natura 2000 program “The Great Sandur of the Brda River”, with the area of 37 106.2 ha, covers with its range north and west part of the Bory Tucholskie forest complex, covering the area of three forestry managements: Rytel, Przymuszewo and Osusznica. It corresponds almost in whole to the Zaborski Landscape Park; additionally it includes also the “Bory Tucholskie” National Park, as well as numerous nature reserves. “The Great Sandur of the Brda River” is characterized by a considerable afforestation, and a strongly developed hydrographic network. There are several dozens of various types of lakes with the Charzykowskie Lake as the biggest of them. The main river is the Brda River and its biggest tributary is the Zbrzyca River. The area is covered mainly by pine forests; the share of deciduous forests is scarce including oak-hornbeams, ols trees and riparian mixed forests. Within the area of “The Great Sandur of the Brda River” the existence of at least 22 species mentioned in Annex I to the “Birds Directive” has been reported. Most important breeding species include the eagle-owl Bubo Bubo, the white-tailed eagle Haliaetus albicilla, the kingfisher Alcedo atthis, the black woodpecker Dryocopus martius as well as the common merganser Mergus merganser and the golden-eye Bucephala clangula. Additionally, the area constitutes an important sanctuary for migrating birds and birds wintering on that area. At the autumn time, one may encounter flocks of cranes Grus grus with as many as thousands of specimens, whereas in winter time one may admire whooper swans Cygnus Cygnus coming from the north and gathering on unfrozen fragments of lakes and rivers. Thanks to the above mentioned, habitats of “The Great Sandur of the Brda River” to a considerable degree have remained their natural character constituting an important birds habitat of a European rank. 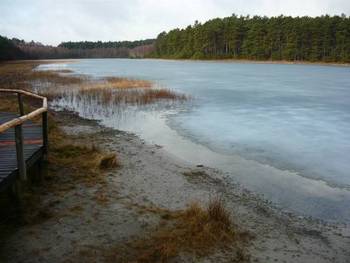 The habitat area of “The Sandur of the Brda River” with the area of 7 492.6 ha entirety falls within the boundaries of the Zaborski Landscape Park, and its southern part is covered by the area of the “Bory Tucholskie” National Park. The sanctuary has been established on the area of two forestry managements: Rytel and Przymuszewo. The area covers numerous nature reserves, such as “Bagno Stawek”(little pond bog), “the Laska Lake”, “the Kulawa River Valley”, which confirms its considerable nature value. Above 87% of the total area is covered by pine forests, there are also deciduous and mixed forests. Protected habitats within the region include, among others pine cladonia forests, wetlands forests, acid beech woods, raised peat-bogs with peat generating plants, dry heathlands, lobelia and natural lakes, dystrophic water reservoirs. Protected animals include: the beaver Castor fiber, the otter Lutra lutra, the great crested newt Triturus cristatus, the fire-bellied toad Bombina bombina, the brook lamprey Lampetra planeri and the thick-shelled mussel Unio crassus, whereas, protected plants include, among others, the water elisma Luronium natans and the lady’s slipper orchid Cypripedium calceolus. An additional asset of the area refers to its rich and diversified lichenoflora  (the flora of lichens).